On the first warm days of spring, tiny western chorus frogs emerged by the hundreds to call for mates in an ephemeral pond on a wildlife preserve in southeastern Indiana. The pond was constructed to mimic a buffalo wallow, a natural depression on flat prairie that temporarily holds water. Many species of frogs thrive in ephemeral ponds as they experience less predation by fish. 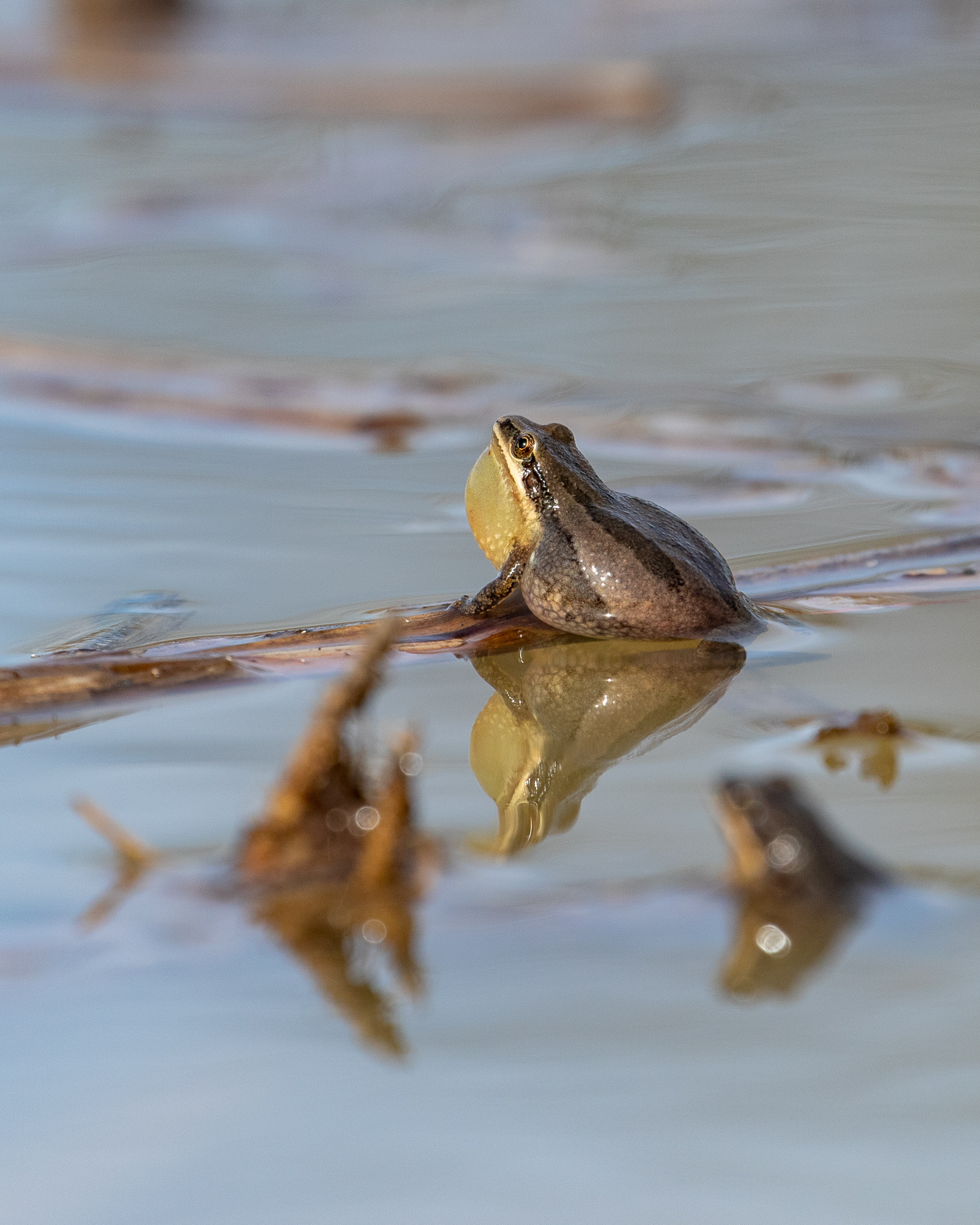 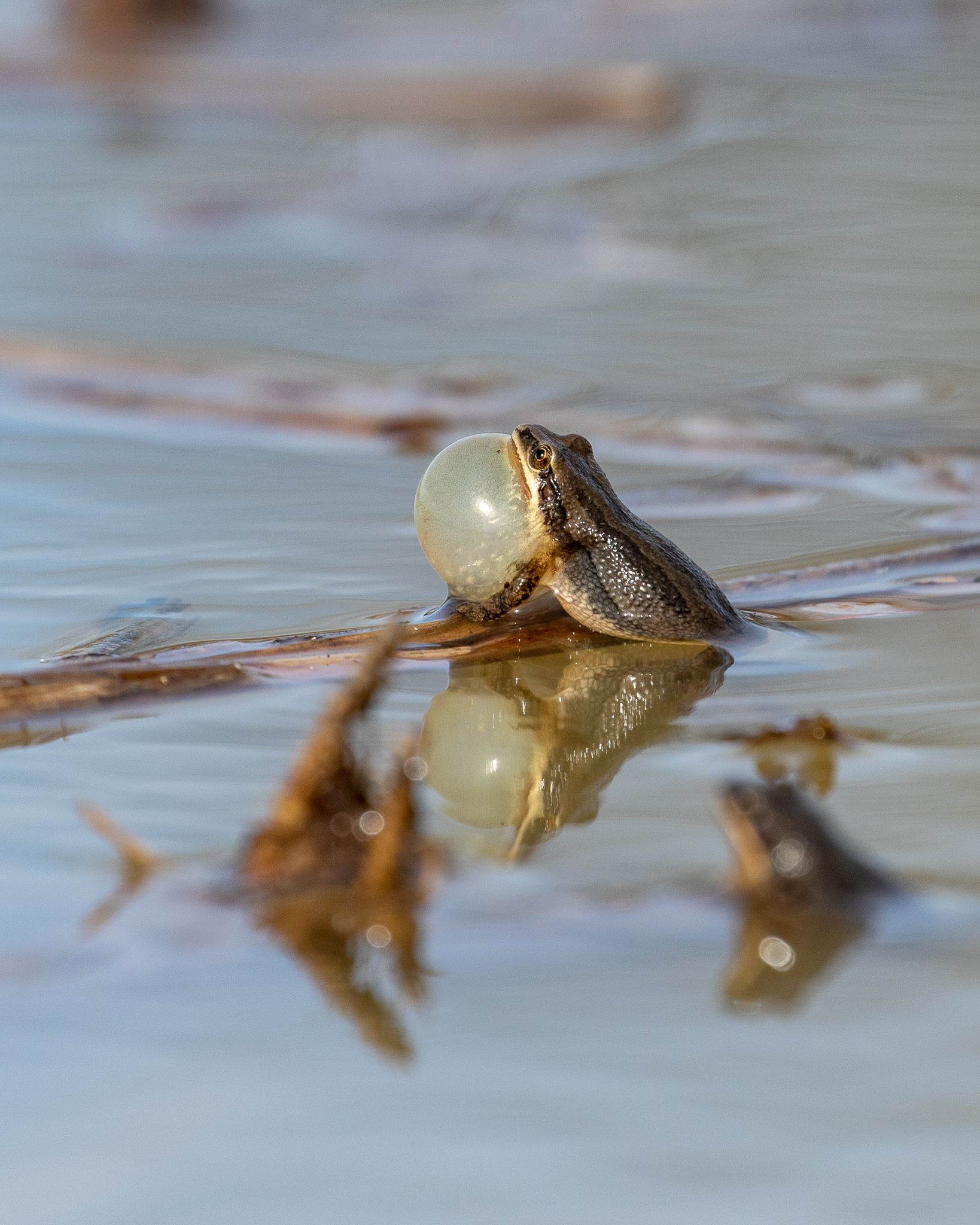 Male chorus frogs push air into their vocal sac, which vibrates and resonates the call to nearby females. Mating occurs from mid-February through mid-May. 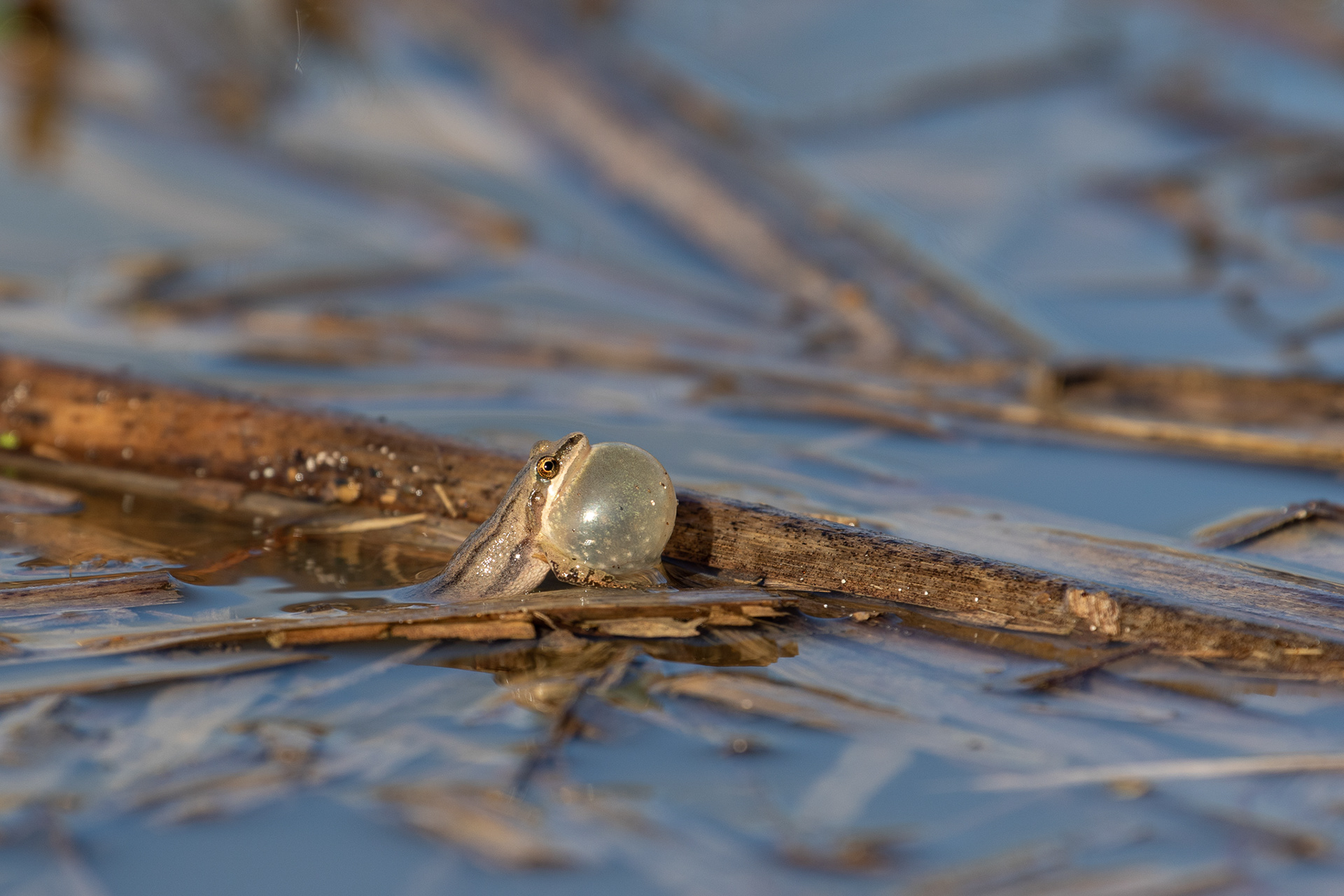 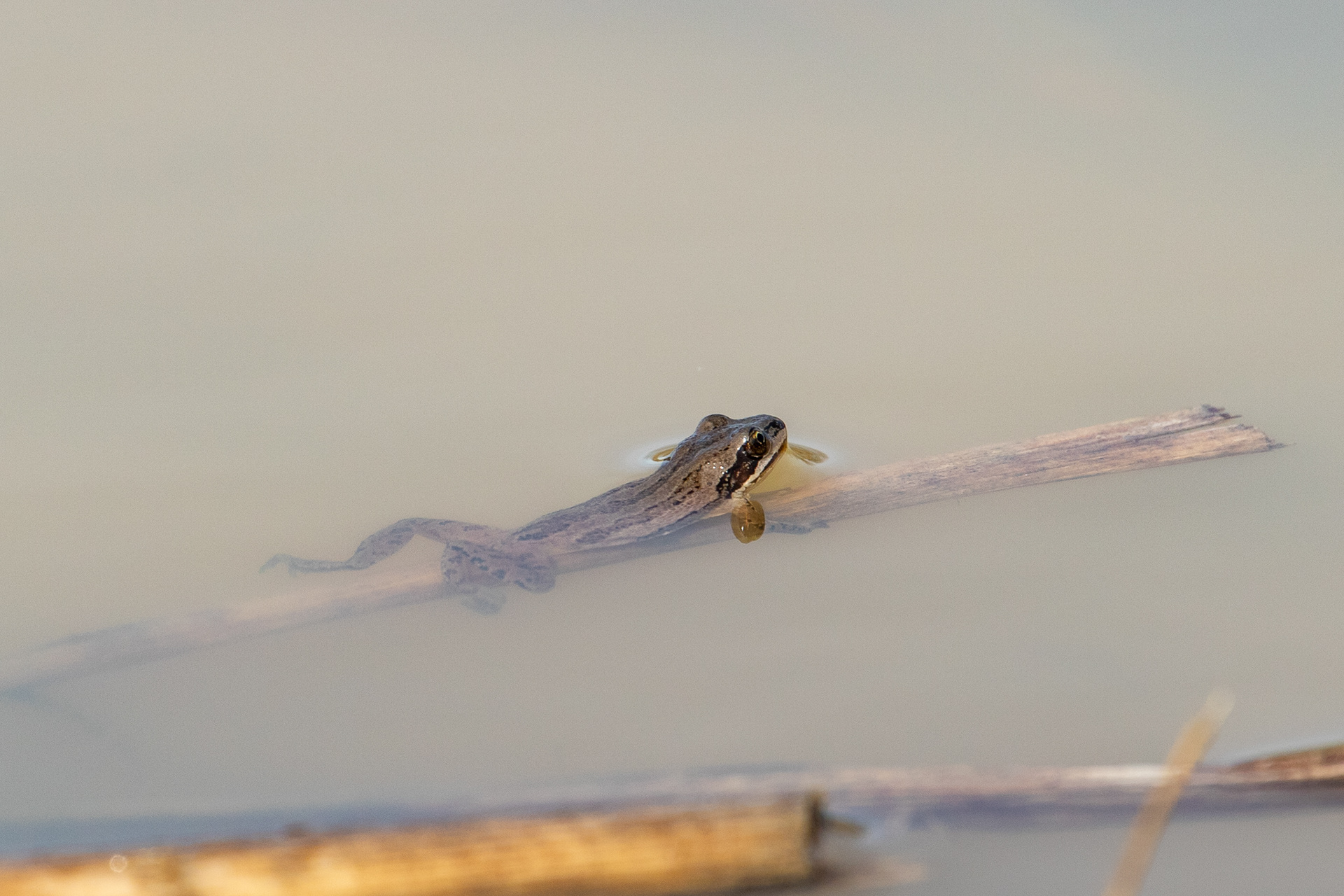 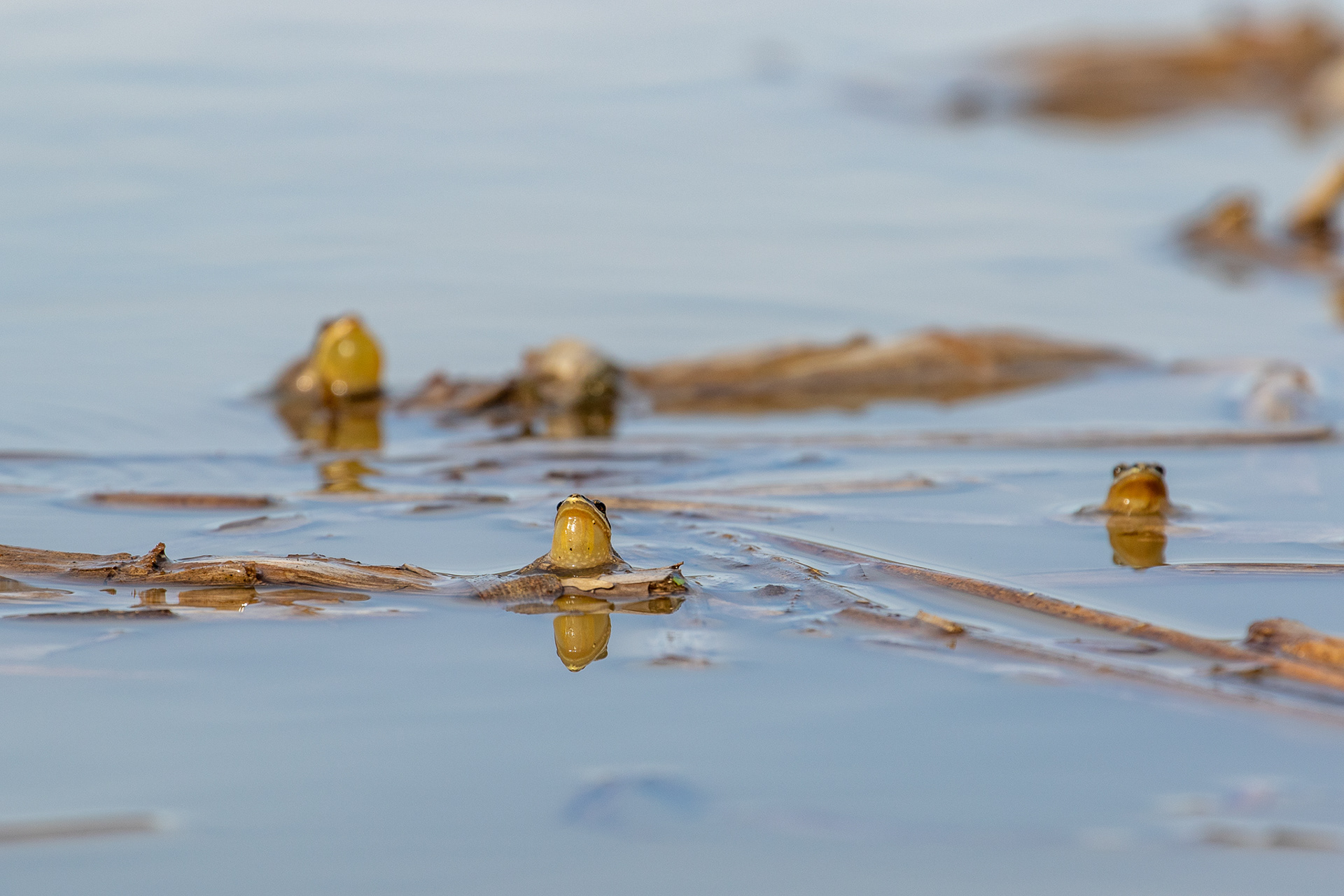 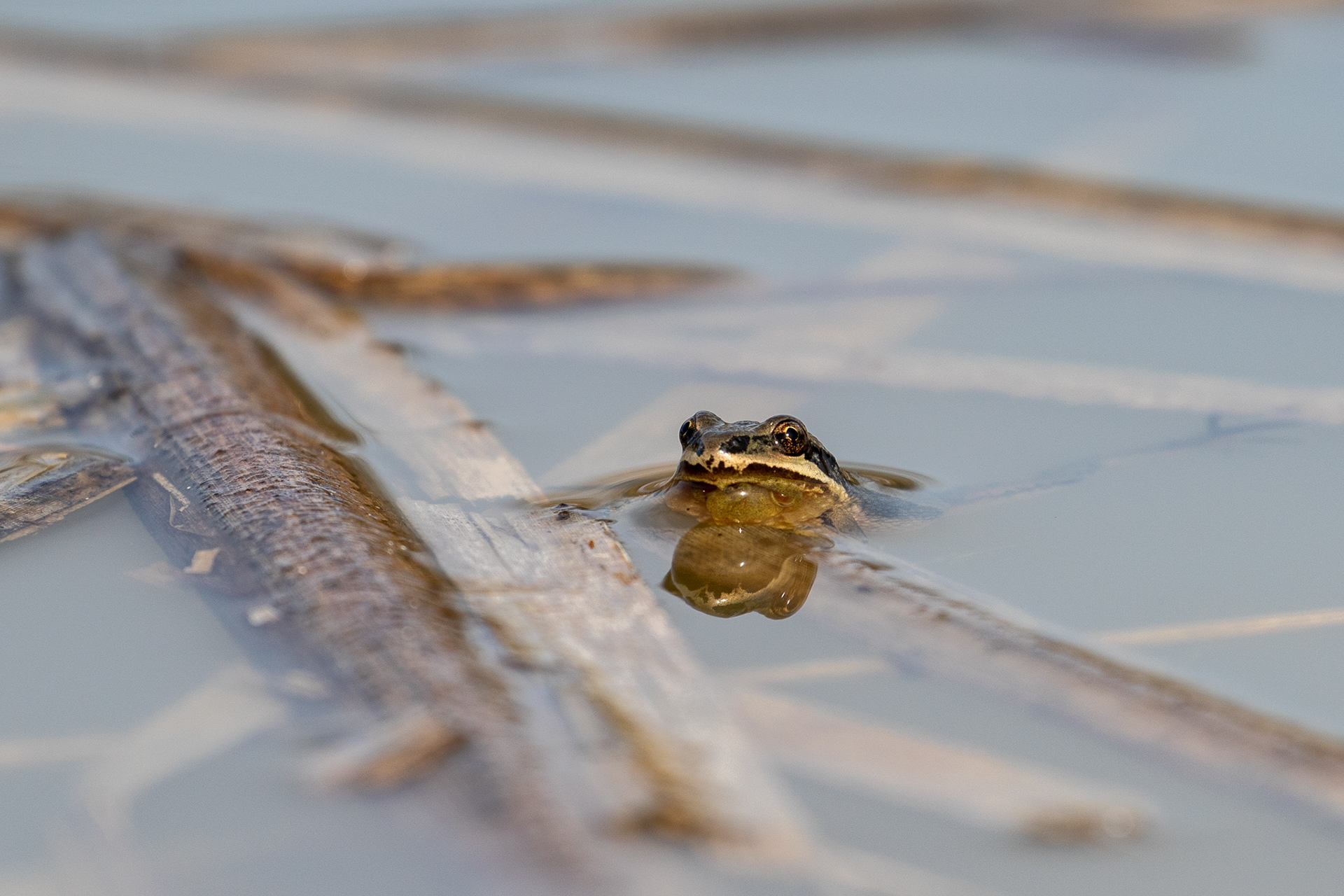 The western chorus frog is only three-quarters to one and one-half inches long. Bring binoculars to spot them in almost any wet habitat in spring. Even when approached quietly, they will most likely sense danger and stop calling. Wait in stillness for a few minutes and they will begin again. Depending on density, the din may become nearly deafening.

These images were captured while lying prone on the bank of the pond using a telephoto lens during late afternoon hours. The longer I waited, the more frogs appeared in close range. Be prepared for mud should you try the same. 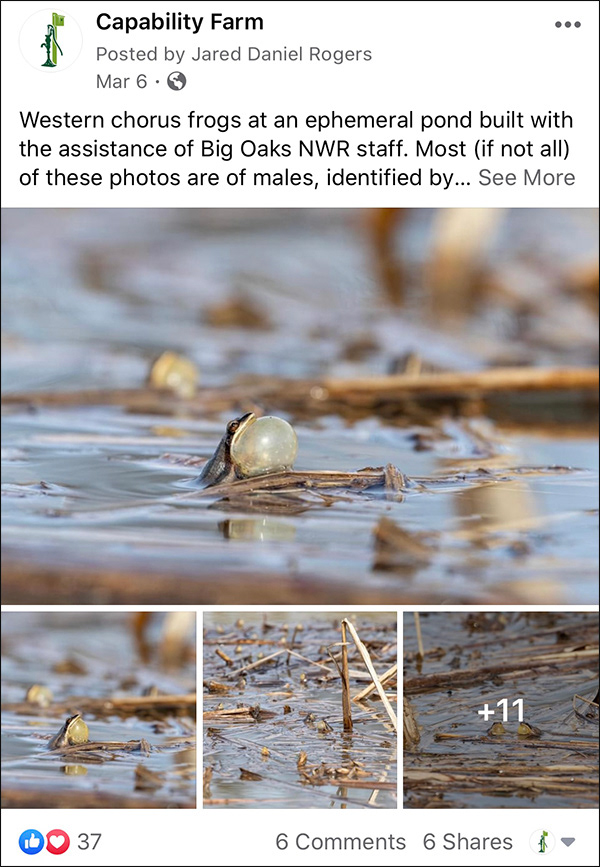 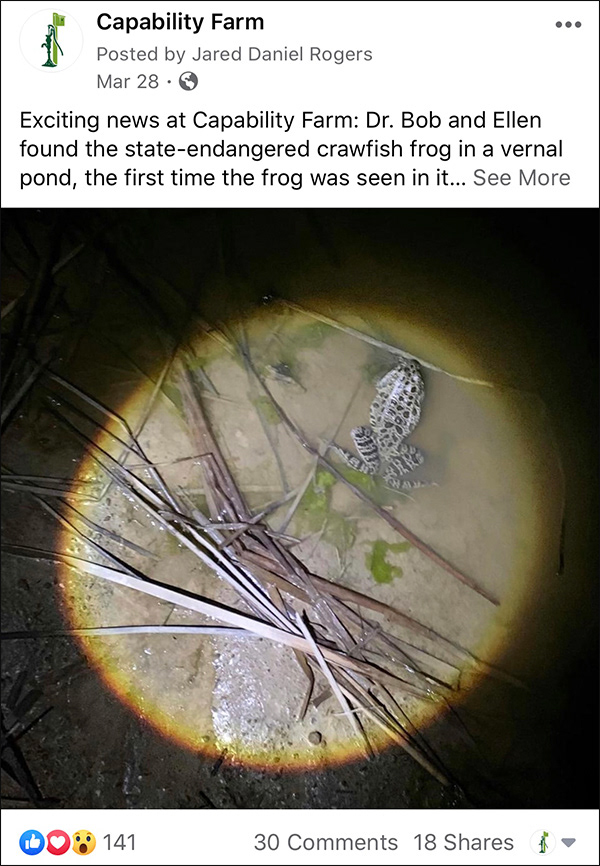 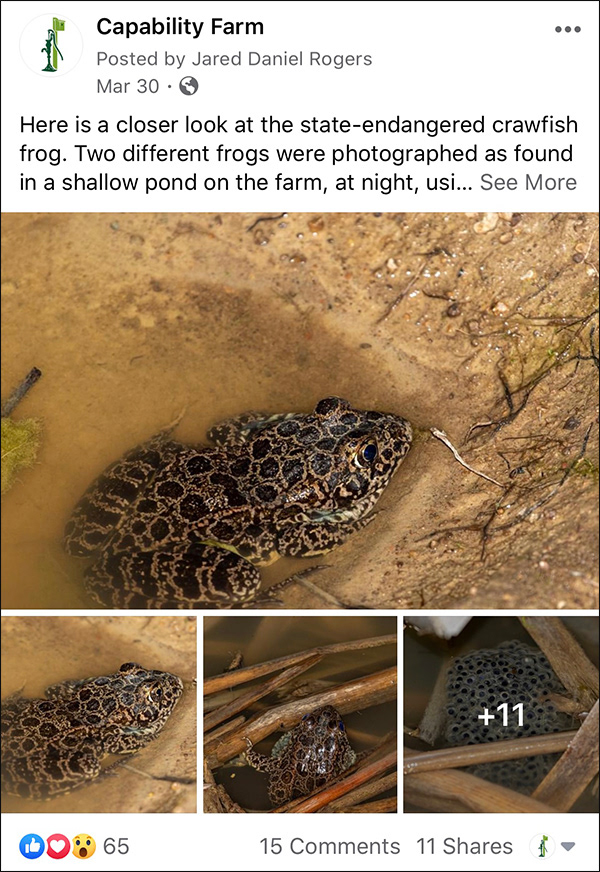 I earned every "like" on these posts - the western chorus frog photos were taken while lying prone in mud on the bank of the pond, and the crawfish frog photos were taken at night! I jumbled my camera, telephoto lens, and a flashlight as I searched around the muck for my subjects. All the mess was worth it though, because there is nothing like the thrill of an adventure, especially when I get to look back on these cool images. The photos were processed in Lightroom with text added in Photoshop. The video was created in Premiere Rush. The page below was created with InDesign.

I interviewed two US Fish & Wildlife land managers at Big Oaks National Wildlife Refuge for the content that accompanied my photographs in this feature page, which published in April 2020 in Ripley Publishing Company newspapers. The owners of Capability Farm frequently work with Big Oaks personnel, so they were a great source to speak on both properties.
Area naturalists learn about endangered "Hoosier frog"
Published April 2, 2019 in the Osgood Journal (Ripley Publishing Company newspapers)
By Jared D. Rogers, assistant editor 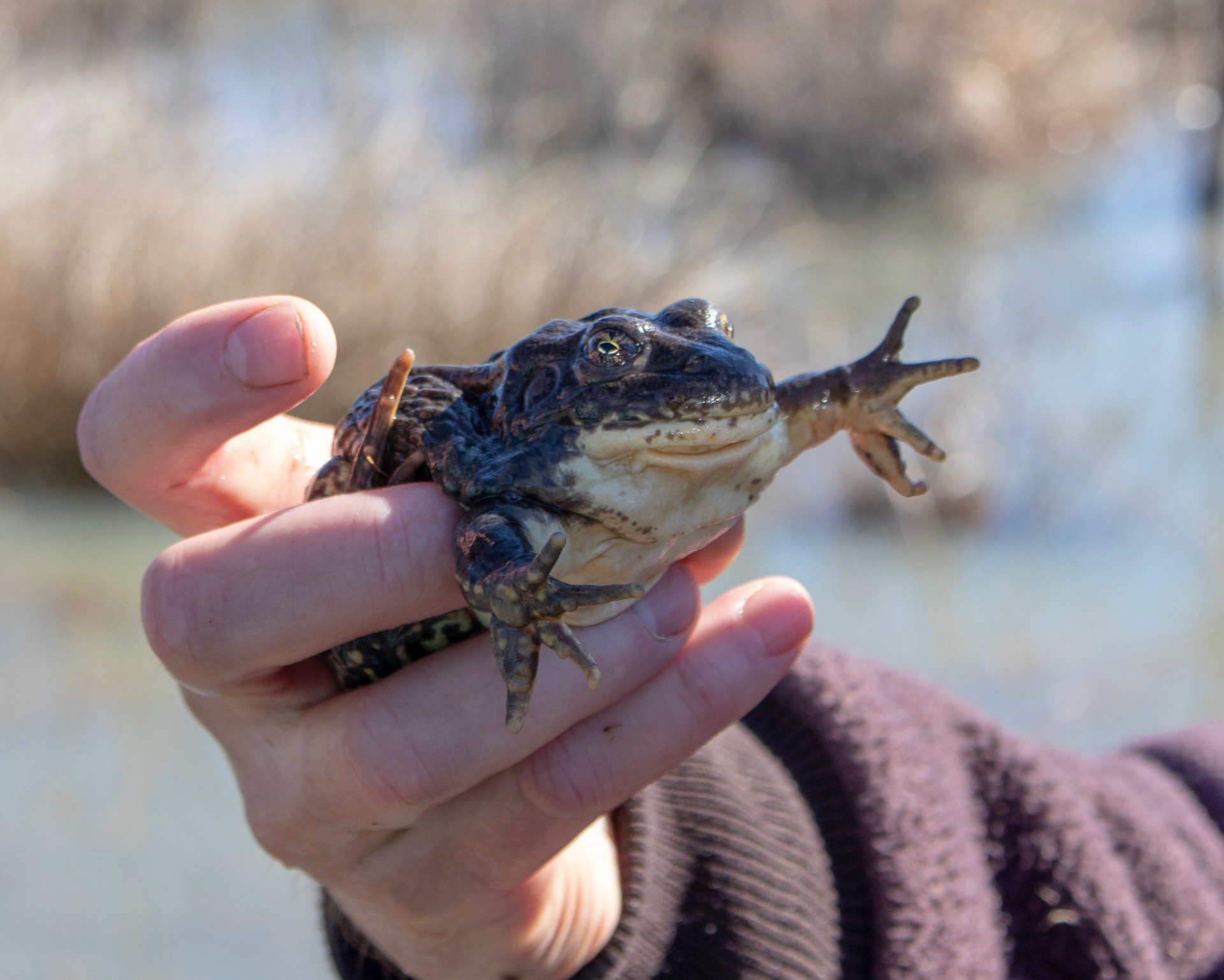 The class was fortunate to find one of the crawfish frogs on the refuge during their field trip. This particular hopper was identified as a male because it had a vocal sac. It was found at a site called "hail pond," named by Refuge Manager Joe Robb. 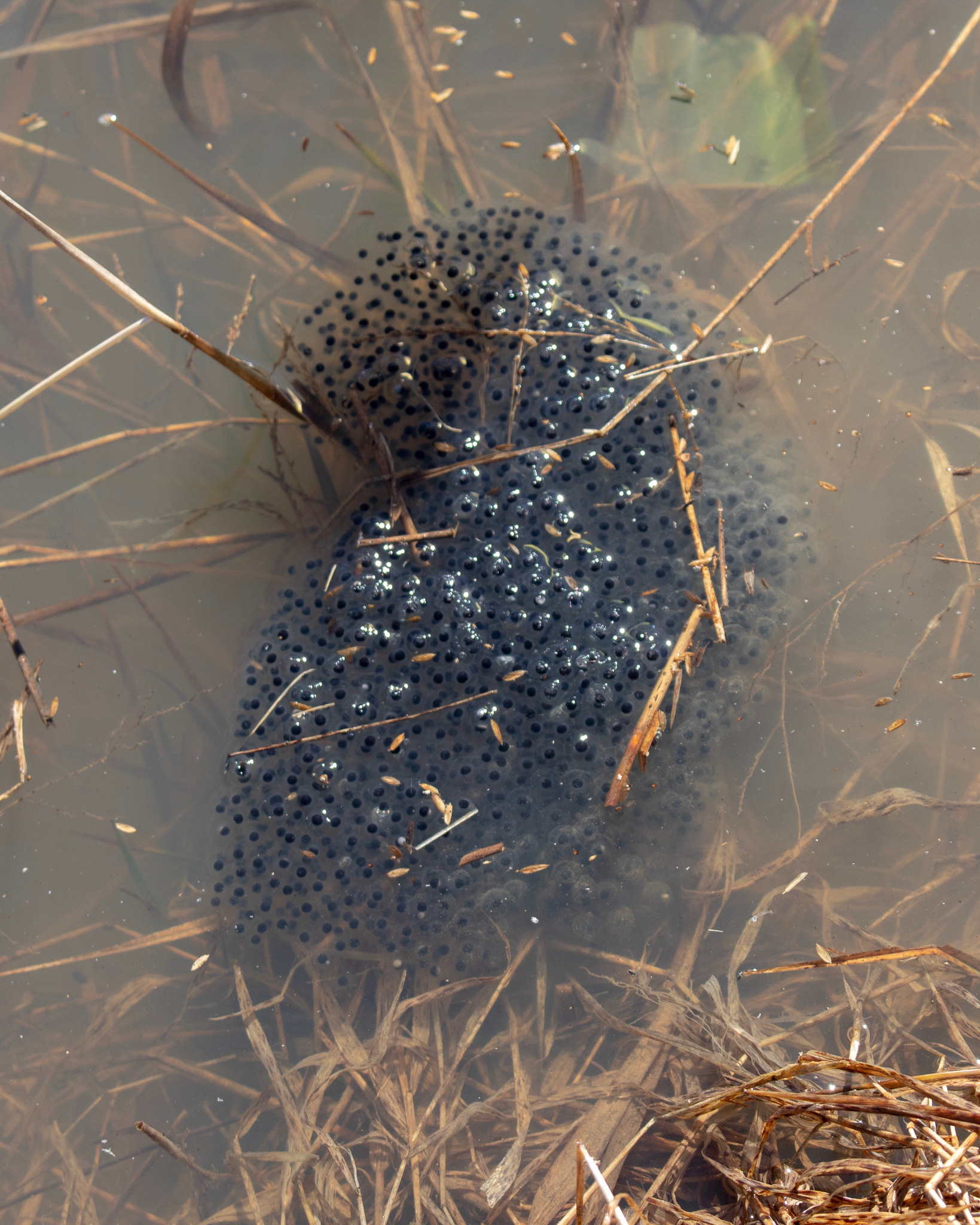 Pictured, a mass of crawfish frog eggs. These frogs lay egg masses with around 5,000 eggs. They take about two to three weeks to develop, depending on the weather. They will develop more quickly in warm weather, but may also be ruined by freezing temperatures or drought. 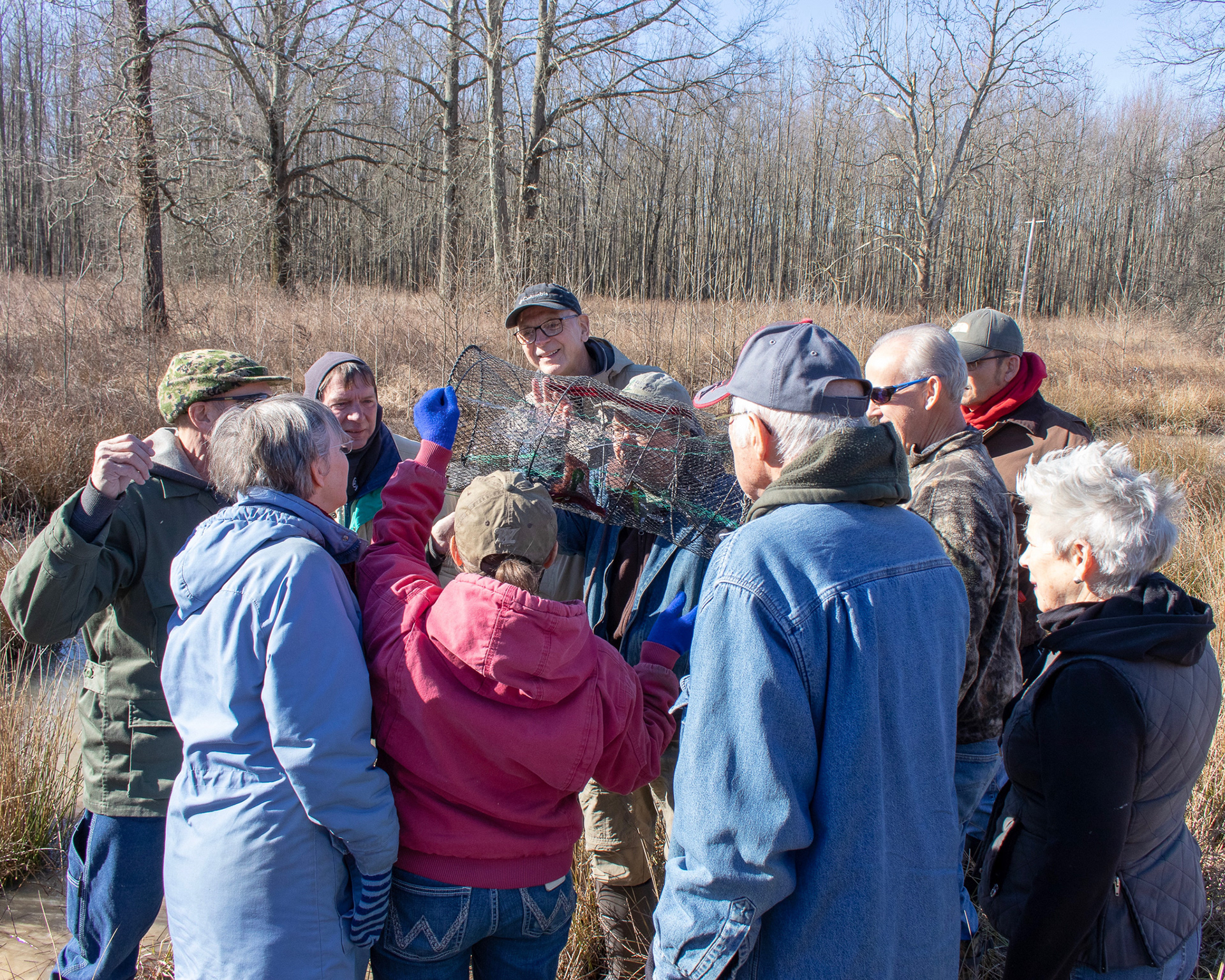 A group of Indiana Master Naturalists examine a frog trap in hopes of finding the endangered crawfish frog. The more common leopard frog was found in this particular trap. It was released to go about its business.

It’s one of the earliest promises of spring: the amphibian orchestra that rings into the slowly warming nights of March. Spring peepers, western chorus, leopard frogs and more sound to the ears of nature enthusiasts sweeter than the most renowned big city symphony. On Saturday, March 23, the local 2019 class of the Indiana Master Naturalist program, organized by the Southeastern Indiana Recycling District, enjoyed the opportunity to learn about one of the lesser known, and endangered, frogs native to Indiana by an expert in the field at Big Oaks National Wildlife Refuge: the crawfish frog.
Led by Big Oaks Refuge Manager Joe Robb, a leading researcher of the crawfish frog, the group of around 25 naturalists set off into the 50,000 acre refuge to search for this endangered species. Once thought to be common in midwestern grasslands, it is now estimated that only around 1,000 of the frogs remain in Indiana, while about 350 of those adults are within the Big Oaks refuge. Tracking efforts throughout the state show that the frog is disappearing county by county at a rate which could ultimately lead to its total loss.
It is fitting for the frogs to find solace in the refuge, since one of the main reasons Big Oaks was established was due to the discovery of several rare and declining midwestern species of plants and animals in the area. For decades up until 1995, the Jefferson Proving Grounds, the former name for the land that is now Big Oaks, were used as an active testing site for explosives by the U.S. military. In managing the land for this purpose, grasslands were established and maintained, whereas almost everywhere else in the area such land was developed for residential, commercial, and agricultural use.
Upon coming to the refuge, Robb thought he could occasionally hear the crawfish frogs call, but it wasn’t until an intern found one on a road that his suspicions were confirmed and he began managing areas of the refuge in order to give the species a chance at rehabilitation.
The crawfish frog is fairly large, bigger than a leopard frog, but smaller than a bullfrog. As their name implies, they utilize crawfish burrows as their homes. Each spring, they emerge from their burrows and will travel up to a couple of miles to find an ephemeral pond in which to mate.
In times of old, the frog is thought to have adapted alongside the roaming bison. Bison are known to wallow in mud, which creates just the type of temporary pond in which crawfish frogs like to lay their eggs. Most frogs utilize these types of ponds without fish, as fish will readily eat frog eggs. Although the Big Oaks refuge area would not have hosted bison in the last century, it just so happens that a crater created by an explosive can also create the ephemeral type of pond the frogs use.
A crawfish frog egg mass contains up to 5,000 eggs. However, only very few reach maturity, which takes about two to three years. Aside from being eaten by fish in a fish pond, they also fall prey to turtles and salamanders. It is also possible for their shallow ponds to dry up before the frogs develop enough to live on land. Those that do survive can live a long life in frog terms. Robb estimates that the oldest specimens he has identified on the refuge to be about 10 years old.
The naturalist group traveled to three different sites where Robb and his interns had set traps to catch the frogs and marked identified egg masses. As part of an active research initiative, the class was shown a special pond that was created to track the number of crawfish frogs coming to mate this spring. A pond dug to the specifications that the frog prefers was surrounded by a silt fence buried into the ground. Every twenty feet or so, on both the inside and the outside of the fence, a bucket was buried in the ground. Every day, at least once per day, Robb and his team check the area and record how many crawfish frogs they catch attempting to either enter or leave the pond.
If a frog is found in a bucket on the outside of the fence, it means it was most likely trying to find a way inside. So, the researchers then release it inside to mate. If the frog was found in one of the inside buckets, it likely means that the frog had already mated and is leaving the pond to seek nourishment and return to its burrow. In that case, they set the frog free outside of the fence.
It is this type of meticulous data gathering that allows the Big Oaks crew to monitor the population on the refuge, and hopefully, watch it grow. From the approximately 350 adults at the refuge, Robb shared with the group that he would like to see the population exceed 600. At that point, their endangered status would be less critical.
So why all of the fuss over a certain type of frog? Generally speaking, a more bio-diverse environment is considered a healthier environment. A more diverse environment can also serve to be utilitarian for humans. Speaking to this, Robb gave the example of the discovery of a new type of medicine. Most pharmaceutical substances were originally found in the natural world. Who knows what potential is being lost when plant and animal species go extinct due to human selfishness?
On a personal level, Robb shared that he felt his life was enriched through interacting with the natural world, whether by listening to the nightly calls of frogs, or watching butterflies visit wildflowers in the summertime. This type of enrichment is hard to measure, of course, but step outside on the next warm spring evening and see if you can relate to this sentiment. That chorus of amphibians may invoke a feeling humans often forget: a sense of both peace and wonder regarding this planet we share.
↑Back to Top